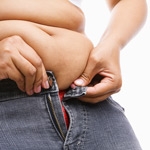 Experts have warned that a fifth of the world population will be obese by 2025.

Research has shown that from 1975 to 2014 the number of men and women classified as obese has risen from 105 million to 641 million.

Scientists have predicted that 18% of men and 21% of women globally will be obese by 2025.

The Lancet medical journal have published that the average BMI (Body Mass Index) has increased from 21.7 to 24.2 since the 1970s.

English-speaking countries including the UK, USA, Ireland, Australia, New Zealand and Canada had the biggest rise in BMI.

‘If you walk into a store in the UK, you cant help but notice that fruit is more expensive than processed foods.

‘Just imagine somebody who is having to work in three jobs, possibly minimum wage, that is going to affect their choices.

‘In France and Switzerland the idea of eating fresh fruits and wholefoods is much more common, some of that has its roots in culture.’

If you are overweight (BMI 28 and over) and tried dieting and excerise but still haven’t had success – please go to www.ukmeds4u.com for a free consultation for other weightloss options.